How Title tag reverse engineering led me to a…

The first time I dealed with the problem of knowing how many words of a Title Tag Google indexes was in October 2011, when I read a detailed article by Enrico Altavilla (in Italian, but I suggest you try reading it with Google Translate). Before that day, I’m honest, I never asked myself that question since I was simply thinking in term of good practice (“keep it short”).
In his article, anyway, Enrico concluded that Google indexes only the first 12 words of a Title tag; at the time, I stored that information without trying to get more knowledge about the topic.
Now, after many months, I’ve conducted a test on my own and I’ve decided it could be interesting to discuss its results.
So, let’s start from the beginning.

I’ll start summarizing what Enrico showed in his post. Considering some documents whose Title tag was longer than twelve words (Eg. One two three for five six seven eight nine ten eleven twelve thirteen fourteen etc.), he showed he couldn’t get them as a result of a thirteen words query on Google using the intitle: operator plus quotes (I can add that you cannot get any results even using allintitle with 13 words): 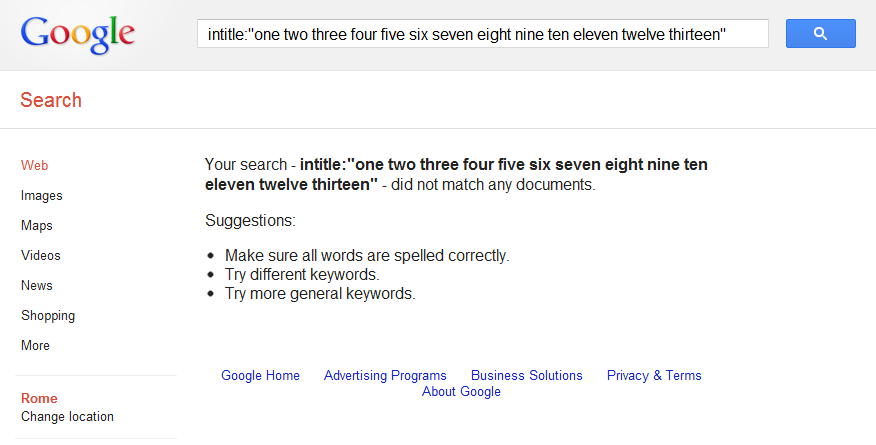 Pages, however, were returned limiting the query to the first twelve words of the Title: 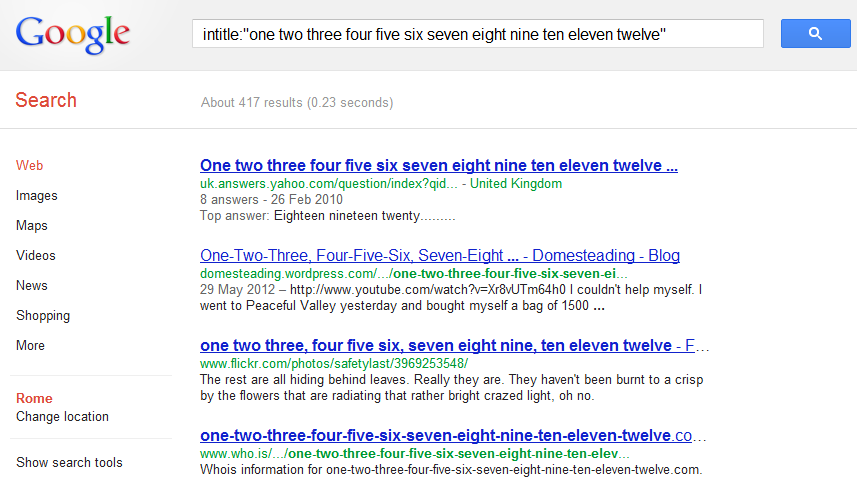 Then Enrico concluded that Google indexes only the first 12 words of the Title tag.

Was there a limit in that test? I didn’t know. Enrico didn’t use any files specifically created for the test (in which he could put some control keywords) and so his conclusions could depend on advanced operators properties. I mean: was Google indexing only 12 words in a Title tag, or was intitle: incapable of working with more than 12 words?

If you look at this screenshot you can easily know the answer:

12 words and no results, just because they’re not the first 12… it’s not a problem of how many words you use with intitle:. The problem is that intitle: works on something that can’t contain more than 12 words.

Some days ago, Darren Slatten added some informations with a post that shows how Google is actually capable of returning documents when you search for the 13th term of a Title Tag.

Now, does this mean that Google indexes more than 12 terms as part of Title tag?

At this point, Darren stated that:

Just Because Google displays 13 words in the title in SERP Does not Mean That document is actually getting credit for all 13 words.

This could be something to be discussed if you look at this SERP: 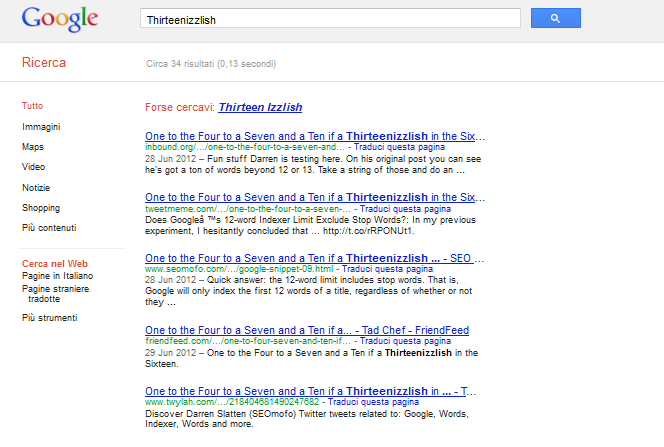 When providing results to a query, Google needs to determine the ranking of each document to produce the SERP and we can notice that the best ranking pages are those which contain the term in the Title (we all know that the presence of a term in the title weights more than if it’s placed in the body). We could conclude that the 13th word of the title is used by Google as well as the previous twelve.
But since that wasn’t a “real SERP”, it could be useful to run a new test to get some other data.

In my test I don’t use an invented word, but a real one: scozzonatore. In Italian, a “scozzonatore” is someone that domesticates horses for riding (a very uncommon word, but it exists in the Italian vocabulary).
Searching for this word, Google.it returns approximately 7.470 results. 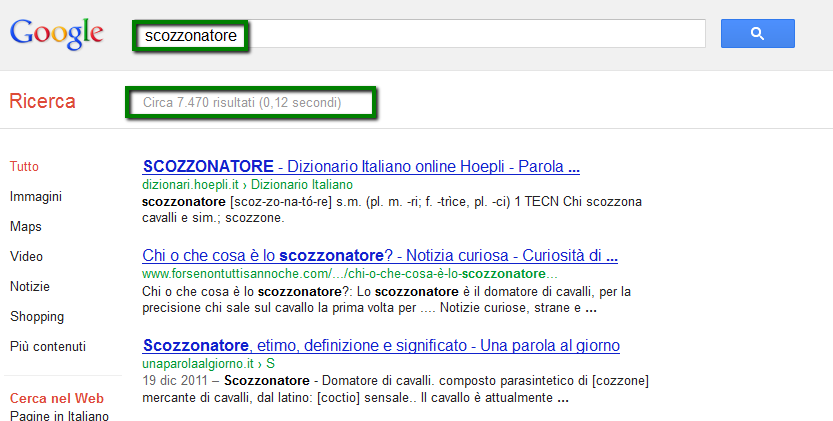 So my question is: Am I able to rank a page in this SERP using the term scozzonatore only as the thirteenth word in a Title tag? To test it I used the homepage of my Italian site.

The title of the page was originally SEO Consultant Giuseppe Pastore – PosizionamentoZen. As you can see, it didn’t contain the term before the test. 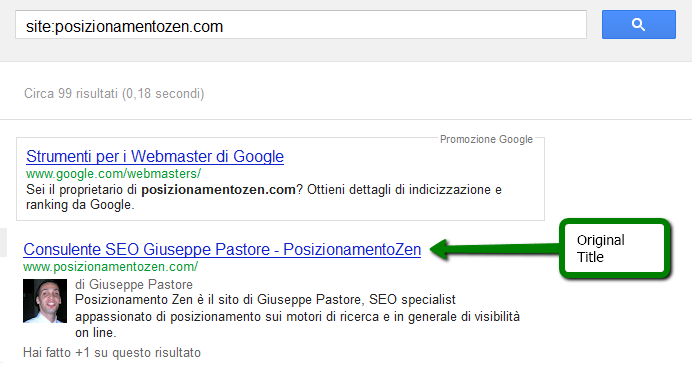 So, I simply changed the Title in:

With scozzonatore as the 13th word of this title, after a few days I’ve had my homepage ranking at the 68th position for this term. 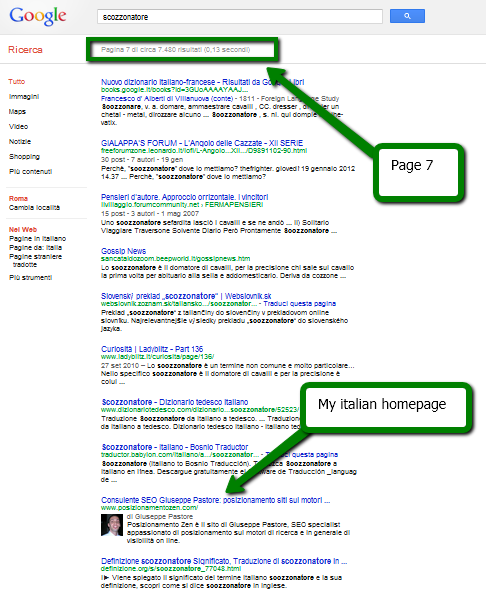 A first conclusion could be that, although its contribution is low, a word at the thirteenth place in a Title helps to rank. But I expected to rank better than 68th and I wondered if that word really belonged to the Title tag or to something else.
Keep in mind I had added the word to the Title, but whilst I can’t get any results using intitle: (you could try yourself), I can get them… using intext:!

It could seem now we have all the answers: Google indexes only 12 words as part of the Title and the rest is somehow included in the body text. But I’m not completely satisfied…

Let’s come back to Enrico’article; in his post he stated that when parsing a web page, Google doesn’t store all the text as it was a sequence of words, but put it into “blocks” and this applies also to Title tag. Some special characters produce this separation. On of these is “|” (Pipe).
For example, if you look at the following two screenshot you can see I’m able to get a page of my crime novels website splitting the title:

But Google doesn’t show any results if I search for the entire title in quotes, because of the pipe:

I’ve asked myself, what if use a 50 words long Title? Does Google put it into several blocks, considering the first one (12 words) as “Title” and the rest as “text“?

This is the page I’ve used:

I’ve tried with different combinations of queries but always with the same result: no difference in treatment between the 13th and the 50th words (those belonging to “text”). So I guess there aren’t any other “blocks” for Title tag, but everything beyond the 12th word (upper limit still uncertain) goes in the same container. That is “text”.

What’s in the middle?

An easy question would now be: if those words belong to the body text, can I search for the 50th word plus the first one of the actual body text, in sequence? Being more clear: does Google put the exceeding words of a Title just before the body text?

The answer is: no. But I’m a curious guy. So look at this:

Google returns the page when I asked for a distance of 3+ words between the last one exceeding in the Title tag and the first actual one of the body text.

I’ve tested other pages with a long title and found that the more the code before the first word in the body, the more the distance you’ve to specify in your query. For this page (http://au.answers.yahoo.com/question/index?qid=20070913190510AAbq71L), for example, it’s 12 words.

I haven’t been able to surely determine what counts as a word, but in my tests it seems you can skip metatags, scripts and css.

Now, it’s time for some conclusions:

The most interesting part, however, is something I wasn’t looking for. Google doesn’t put the extra words of a Title just before those ones in the actual body text: code between them seems to be counted as words.

Looking at this, we should ask ourselves: does a lot of code before our text hurt our on-page optimization? It could be not only a code/text ratio problem, nor a matter of how many Kbytes the file weights. Your “text” containing unwanted and unknown stuff could be something bigger than a vague prominence concept.

Test your own ideas

Anyway, I’ll finish this post with a consideration: I’ve started a test looking for Title tag and ended up to a totally different problem.
This should suggest you not to accept what other SEOs say without doing your own tests: you could find either different or identical results, but if you don’t try there’s no chance you can find extra interesting informations.

Now, if you’ve arrived to read this final paragraph, maybe it means you liked this post. Please consider sharing it, and enjoy your reverse engineering (and if you continue my test, don’t forget a link!).